The Church’s Role in Science 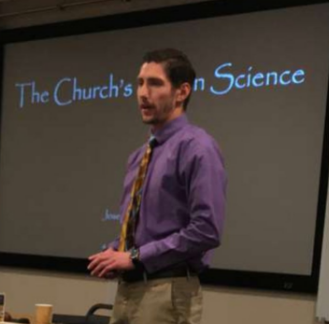 Last month I spoke at the Vandal Catholic Encounter on the topic of the Church’s role in science. Here is a link to the video recording. I apologize for how much you’ll have to strain to listen and see. In the future I hope to write an article to revisit the topic in more depth and perhaps do a different video recording.

In summary, the Church is not afraid of science. In fact, the Church embraces science and uses it. For example, in the lifetime of Galileo, though before the disagreements over cosmology surfaced, the Gregorian calendar reform took place. This calendar reform used humankind’s improved knowledge about the seasons, thanks to the science of astronomy. When Galileo first used a telescope and discovered Jupiter’s moons not orbiting the Earth, he began to promote heliocentrism openly. He was right about the Earth orbiting the Sun and about interpreting some passages of Scripture metaphorically. The Church and many people at the time held Galileo’s ideas suspect and asked for proof. Galileo was wrong that the tides prove the Earth’s motion; the tides are caused by the Moon and Sun. For promoting heliocentrism so vehemently after he had promised not to, he was sentenced to house arrest, where he lived the last decade of his life. Proof for the Earth’s motion came in the 19th century with Foucault’s pendulum. Pope St. John Paul II, on October 31, 1992, asked for forgiveness for how Galileo was treated (although by no means was he tortured or killed; rather, he was given first-class lodging during his trial in Rome). John Paul also said, “In fact the Bible does not concern itself with the details of the physical world, the understanding of which is the competence of human experience and reasoning.” (Read a translation of his speech here.) Not only does the Church recognize the role science has in advancing human knowledge about the universe we live in, but the Church also has a role in science. Institutions like the Vatican Observatory that participate in relevant science are an excellent example of this.